The wish to penetrate the past, to rebel against the irreversibility of time - this is what fuels my practice. I use vintage photographs as a means of launching my painting. They allow me to have a window into the past, but this window is cut by the person behind the lens, so it is biased and selective. Photographs tease us with a glanced moment but they do not allow the moment to be entered into. So as a time machine, the photograph is rather flawed.

Why do I have this desire to enter the past in the first place? Being born in the USSR just prior to its collapse, I spent my childhood in the ruins of its cultural paradigm. The oral narratives passed down to me by family recounting the Soviet era were rather contradictory, my school history textbooks were being altered and re-written in front of my eyes, so my generation learned early that history cannot be trusted. They say to know the future one must know the past - but what happens if you have no past, what happens when you’re born at the point of a fissure, a crack, a departure?

In my practice I alter, abstract, and fictionalize transferred photographic images, either of my family or found in flea markets, leaving an imprint of my own bodily movement in them through my gestured marks - and this movement driven by the desire to reclaim the past. By translating the sign of “oldness” into a painted image I can control the visual dynamics of the photographic image, start to impose my own subjective position, organize a formal space and think through painting. The large formats of my canvases allow me to feel them not as a window, but rather as a portal to the past, through which I can insert my presence. I seek to disrupt the linear spatial perspective of the photograph, so I deliberately destroy the relationship between the foreground and background, mixing them into a single pictorial mass of slimy paint.

Therefore, my painting is a way to enter into some sensual interaction with the reality from the past, captured in images, driven by my protest against the subjectivity of history. 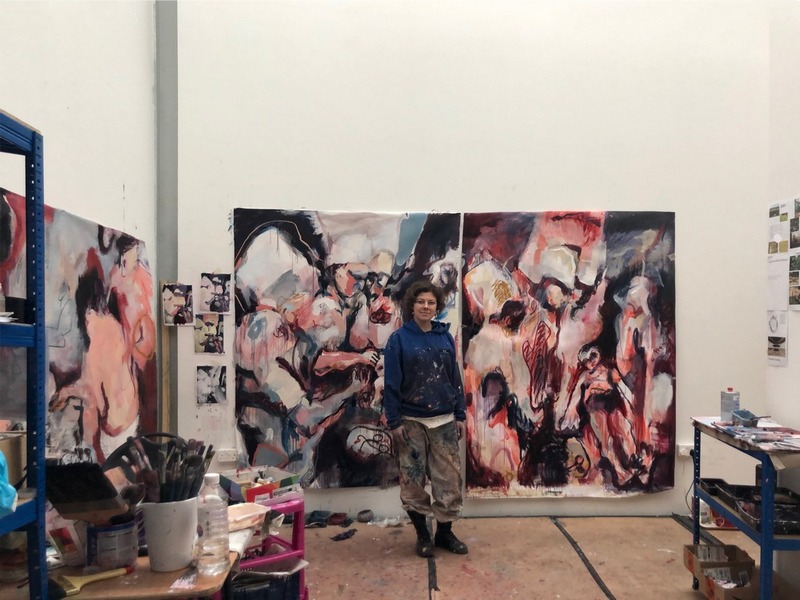